The Curious, Strange and Sad Case of Johnny Grigas 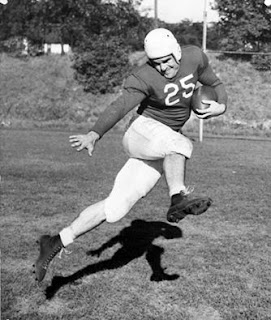 Johnny Grigas loved to play football. And he was very good at it!

After an All American career in the backfield at Holy Cross, Grigas was a second

Then, on December 3,1944, the talented Grigas did the unthinkable and failed to show up for the final game against the Chicago Bears...

The "Mason City (IA) Globe" basically described Grigas as a deserter while the headline of "The Fresno (CA) Bee" stated: "Hard Work Bores Grigas, So He Quits." In reality, Grigas was far from a quitter. He was a determined football star who simply was beaten up by playing 60 minutes, frozen fields, little blocking protection, and irksome injuries. He explained his absence in an open letter to his coaches and teammates by noting: "I tried to win and worked hard, but the workhorse, as I was termed by the newspapers, is almost ready for the stud farm." Grigas added: "The human mind is the faculty of the soul, which is influenced by the human body. When your mind is changed because of the physical beating, week in and week out, your soul isn't in the game."

In January, 1945, Coach Phil Handler of the Cardinals shared some additional insight with the "Detroit Free Press" regarding the Grigas situation--and it does, once again, help explain the differences between the rugged gridders of the 1940s and today's players: "Grigas worked days in a steel mill at a job where he had to stand all the time. The team practiced at night and because of a shortage of backs, Grigas had to work out both on offense and defense. Then Sundays he played sixty-minute football. The strain was too great, and he finally gave up."

A full-time day job, a full-time responsibility on the field, and the pressure of being the "workhorse" for an ugly team all helped contribute to the intriguing decision made by Grigas. He was traded to the Boston Yanks after the season and played three more years in the NFL, but was never able to duplicate the statistical success he achieved with the Cardinals...

DID YOU KNOW?
* Following the Grigas incident, newspapers first began to encourage the NFL to monitor injury situations (possible concussions).
* Grigas still managed to finish second in the NFL in rushing in 1944, and was named to the first team of the "All NFL" honor squad.
* Art Rooney, founder of the Pittsburgh Steelers called the 1944 Card-Pitts "The worst team in NFL history!"
round draft choice of the Cardinals in 1943. He topped the club in rushing with 333 yards in 1943, then stayed with the Cardinals as the team merged with Pittsburgh in 1944 to form the woeful Card-Pitts creation. The combined team suffered through an 0-10 season, but Grigas paced the NFL in rushing through most of the season. He also starred on defense and usually played all 60 minutes for the Cards.
Posted by スミス at 7:37 AM