In the final year of the existence of the "Chicago Cardinals," the team called as their home Soldier Field, which at that time was an Olympic sized stadium which had, that summer, played host to the Pan American Games (the Western Hemisphere version of the Olympics. Soldier Field was opened in 1924, originally as 45,000-seat Municipal Grant Park Stadium.  In 1971, the Chicago Bears began playing their home games at Soldier Field after 50 years at venerable Wrigley Field.

The first football game played on its field was November 22, 1924, as a capacity crowd watched Notre Dame edge Northwestern, 13-6.  Over 100,000 spectators attended the 1926 Army-Navy Game, in which it was  decided the national championship, as Navy entered undefeated and Army had lost only to Notre Dame.  The all-time collegiate attendance record of 123,000 plus was established Nov. 26, 1927 as Notre Dame beat Southern Cal 7-6.

In the first professional game at the then-mammoth stadium, the Bears defeated the Chicago Cardinals 10-0 on November 11, 1926. Since that time, the Chicago Cardinals played at various times at Soldier Field during those periods when their other home fields- Comiskey Park or Wrigley Field, were not available.
During their final season in the Windy City, and in the midst of another awful 2-10 season that marked their ninth losing season in ten years, the Cardinals era in Chicago was ended with a whimper. as it had become all too clear that the Cardinals, just like the White Sox, were Chicago's other team, and no matter what they did, nothing could ever fix that. The Cardinals legacy of losing had made it impossible for them to compete with the Bears, who were among the NFL premier franchises from day one. For their final season the Cards played four home games at Soldier Field and two in Minnesota in an attempt to find a new home. The franchise would earn its final win as the Chicago Cardinals on November 1, 1959, against the Pittsburgh Steelers, before losing their final six games. Shortly thereafter, after the Bears defeated the Cardinals in their final home game at Soldier Field, then owner Violet Bidwell decided to relocate the team to St. Louis.

Plans for the stadium started in 1919 as a memorial to the soldiers of WWI. Soldier Field stood on 10,000 pile foundations driving an average depth of 62.5 feet through fill that replaced the lake waters. The new stadium continues to be owned, maintained and operated by the Chicago Park District. 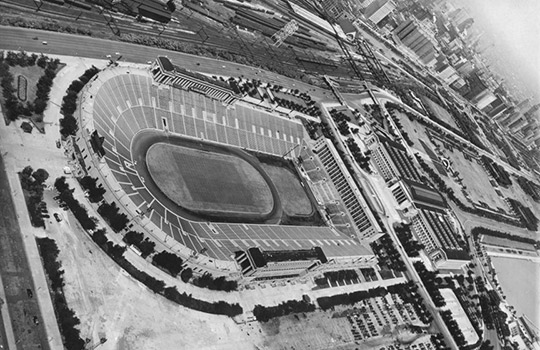